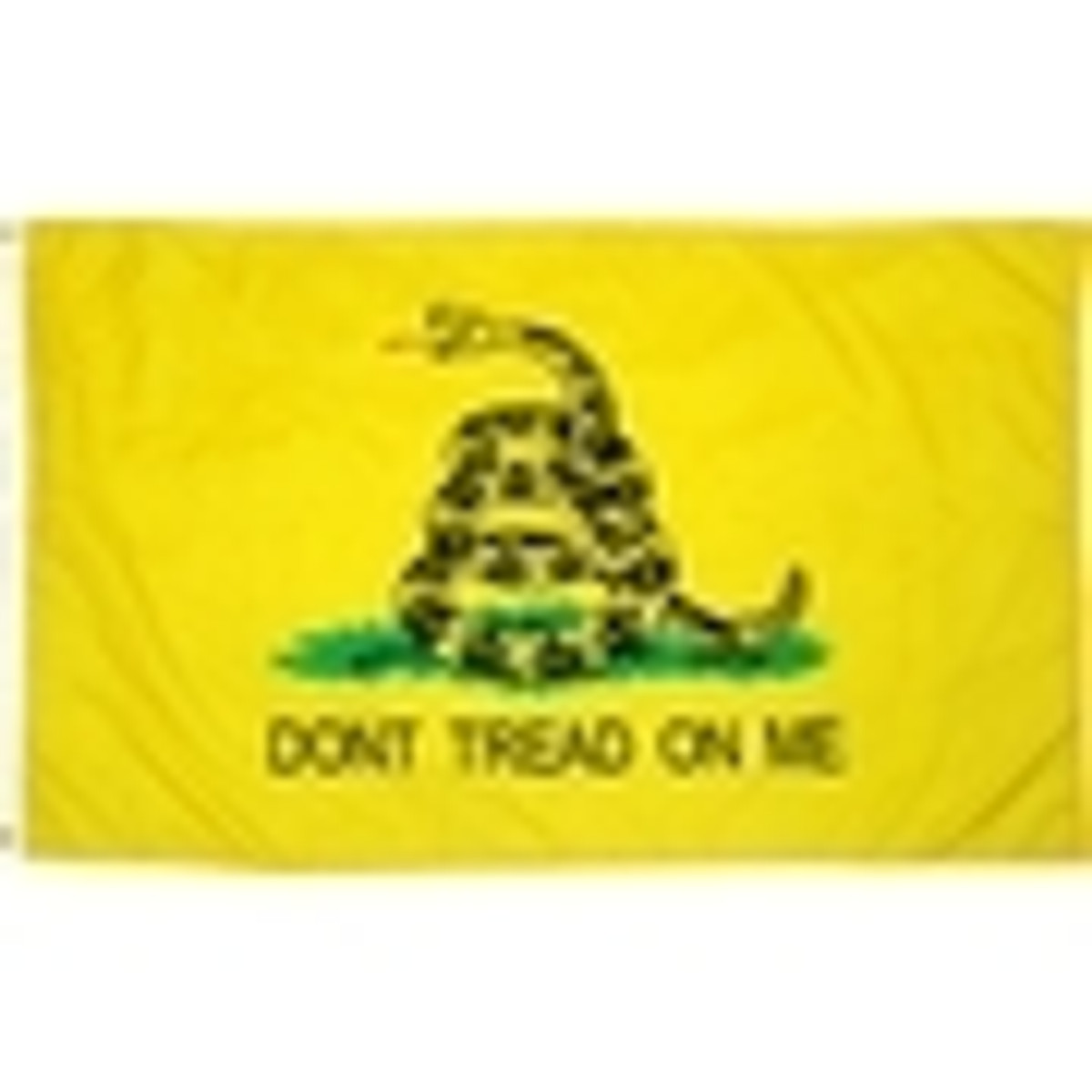 Gadsden Flag (Dont tread on me)

No matter what your inspiration for seeking out a Gadsden flag, The United States Flag Store has plenty of options. Look for sizes from 4" x 6" to 3' x 5' and a variety of materials, like cotton and super-knit polyester. In addition to flags, we're also proud to carry a full range of Don't Tread on Me and Gadsden flag accessories, like hats, t-shirts, mugs and stickers.

See and feel the difference in our brand of flags. Our 3x5 Super Knit Polyester Gadsden Flags are made with superior materials like high tech silky looking polyester that lasts 4 times longer than cheaper polyester flags. This material compared to nylon flags has the same durability, print quality and construction at a lower price. This Gadsden flag is vibrant and has fade resistant colors on both sides. We also used brass grommets which are rust-proof unlike comparable flags which use steel grommets painted to look like brass. We also offer quantity discounts on 2 or more of these flags. You won't find a better price for this quality of flag anywhere else online!

Gadsden Flag - Don't tread on me meaning and origin/history

"The Gadsden Flag: Symbol of Freedom"

The history of the flag "Don't Tread on Me", which is officially known as the Gadsden flag, is one of the great symbols of disagreement. Featuring a coiled rattlesnake meaning it's ready to put up a fight. As for it's origins, the flag is also named after statesman Christopher Gadsden, who designed the flag during the American Revolution. It was also used by the Continental Marines and was most recently embraced by Tea Party movement protesters in the late 2000s.

What does don't tread on me mean in history?

The "Don't Tread of Me" motto meaning and origin of the Gadsden Flag has traditionally been seen as a symbol of American patriotism but ultimately means freedom and respecting the rights of a individual's position. This motto has been used with the flag since 1775. The traditional imagery associated with the meaning of the Gadsden Flag is a Yellow Flag with a rattle snake.

The first mission ever authorized by Second Continental Congress for the NEW American Navy enlisted Marines from Philadelphia. These particular marines were widely known for carrying drums with the image of a coiled rattle snake with 13 rattles with the motto "Don't Tread On Me" displayed on a yellow background which represented and is associated with libertarianism. The timber rattle snake can also be found in all 13 colonies which may also explain it's origin of design. It is strongly believed that this imagery and it's meaning is what inspired the Continental Colonel, Christopher Gadsden, to create this flag which is also known as the Gadsden flag.

Don't Tread On Me Garden Flag, Patch, Hat, Shirt and other accessories

Along with our flags which you can shop from above we also offer a variety of products with the "Don't Tread On Me" motto and rattlesnake image. We have a yellow hat and black hat that are both embroidered and have a adjustable velcro strap for a custom fit. Our Gadsden Patch also is embroidered and has a vinyl backing for easy iron on or can be sewn on, which ever application you prefer. We also have a Polo Shirt that displays the snake in the top left with the motto "Don't Tread on Me".

Read about it at our Flag Blog today!