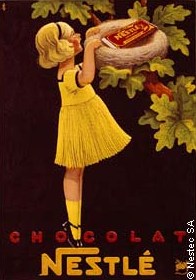 Nestlé began in Switzerland in the mid 1860s when founder Henri Nestlé created one of the first baby formulas. Henri realized the need for a healthy and economical product to serve as an alternative for mothers who could not breastfeed their babies. Mothers who were unable to breastfeed often lost their infants to malnutrition. Henri’s product was a carefully formulated mixture of cow’s milk, flour and sugar. Nestlé’s first product was called Farine Lactée (“cornflour gruel” in French) Henri Nestlé. The product was first used on a premature baby who could not tolerate his mother’s milk or other alternative products of that time. Doctors gave up on treating the infant. Miraculously the baby tolerated Henri’s new formula and it provided the nourishment that saved his life. Within a few years the first Nestlé product was marketed in Europe.

In 1874 the Nestlé Company was purchased by Jules Monnerat. Nestlé developed its own condensed milk to contend with its competitor, the Anglo-Swiss Condensed Milk Company. The Anglo-Swiss Condensed Milk Company made products like cheese and instant formulas. The two companies merged in 1905, the year after Nestlé added chocolate to its line of foods. The newly formed Nestlé and Anglo-Swiss Milk Company had factories in the United States, Britain, Spain and Germany. Soon the company was full-scale manufacturing in Australia with warehouses in Singapore, Hong Kong and Bombay. Most production still took place in Europe.

The start of World War I made it difficult for Nestlé to buy raw ingredients and distribute products. Fresh milk was scarce in Europe, and factories had to sell milk for the public need instead of using it as an ingredient in foods. Nestlé purchased several factories in the U.S. to keep up with the increasing demand for condensed milk and dairy products via government contracts. The company’s production doubled by the end of the war. When fresh milk became available again after the war, Nestlé suffered and slipped into debt. The price of ingredients was increasing, the economy has slowed and exchange rates deteriorated because of the war. 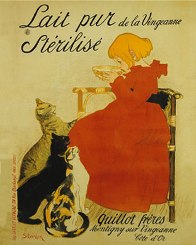 An expert banker helped Nestlé find ways to reduce its debt. By the 1920s Nestlé was creating new chocolate and powdered beverage products. Adding to the product line once again, Nestlé developed Nescafé in the 1930s and Nestea followed. Nescafé, a soluble powder, revolutionized coffee drinking and became an instant hit.

With the onset of the Second World War, profits plummeted. Switzerland was neutral in the war and became increasingly isolated in Europe. Many of Nestlé’s executive officers were transferred to offices in the U.S. Because of distribution problems in Europe and Asia, Nestlé opened factories in developing countries in Latin America. Production increased dramatically after America entered the war. Nescafé became a main beverage for the American servicemen in Europe and Asia. Total sales increased by $125 million from 1938 to 1945.

Nestlé continued to prosper, merging with Alimentana S.A., a company that manufactured soups and seasonings, in 1947. In the coming years, Nestlé acquired Crosse & Blackwell, Findus frozen foods, Libby’s fruit juices, and Stouffer’s frozen foods. Nescafé instant coffee sales quadrupled from 1960 to 1974, and the new technology of freeze-drying allowed the company to create a new kind of instant coffee, which they named Taster’s Choice.

Expanding its product line outside of the food market, Nestlé became a major stockholder in L’Oréal cosmetics in 1974. Soon after the company suffered with increasing oil prices and the slowing growth in industrialized countries. Foreign exchange rates decreased, in turn reducing the value of sterling, the pound, dollar and franc. Prices of coffee beans and cocoa rose radically, presenting further problems for Nestlé. The company decided to venture into the pharmaceutical industry by acquiring Alcon Laboratories, Inc. While trying to deal with unstable economic conditions and exploring its new ventures, Nestlé faced the crisis of an international boycott.

Many organized groups began boycotting all of Nestlé’s products because they disapproved of Nestlé marketing its baby formula in developing countries. Problems like illiteracy and poverty caused some mothers to use less formula than recommended. In a watered down formula, vital nutrients are lessoned. Contaminated water presented another problem, since the formulas had to be mixed with water. The organizations argued that the misuse of formula resulted in the malnutrition or death of many infants in developing countries.

According to Nestlé the World Health Organization never made statements tying infant death or malnutrition with baby formulas. The company didn’t deny the superiority of breastfeeding and agreed that substituting breast milk for other substances could be very dangerous. Nestlé explained that breastfeeding and non-breastfeeding mothers in developing countries often gave their babies whole cow’s milk, tea, cornstarch, rice water or a mix of flour and water. These alternatives were very unhealthy and a nutritional baby formula was a better choice. Nestlé says that it has never discouraged breastfeeding when it was possible. Nestlé agreed to follow the International Code in developing countries in 1984, and the boycott was suspended. It resumed several years later when the organizations believed Nestlé was sending free or low cost baby formulas to developing countries. Nestlé said it only sent formula to countries that allow donations for orphans, multiple births, and babies with no access to breast milk. The company has stopped all public advertising for formula in developing countries for almost 20 years. The boycott continues to some extent to this day without satisfactory resolution.

By the 1980s Nestlé had a new Chief Executive Officer. The company focused on improving its financial situation and continuing to expand. In the one of the largest takeovers at that time, Nestlé bought Carnation for $3 billion and parted with any unprofitable businesses. International trade barriers diminished in the 1990s, opening trade with parts of Europe and China. In the 1990s Nestlé acquired San Pellegrino, and Spillers Petfoods of the UK. With the acquisition of Ralston Purina in 2002, the Nestlé-owned pet care businesses joined to form the industry leader Nestlé Purina PetCare. The leading in the food industry, Nestlé brings in $81 billion in overall sales and has 470 factories around the world. Nestlé will continue to grow, introduce new products and renovate existing ones. The company’s mission is to focus on long-term potential over short-term performance. 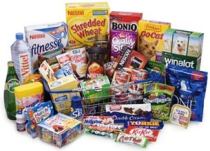