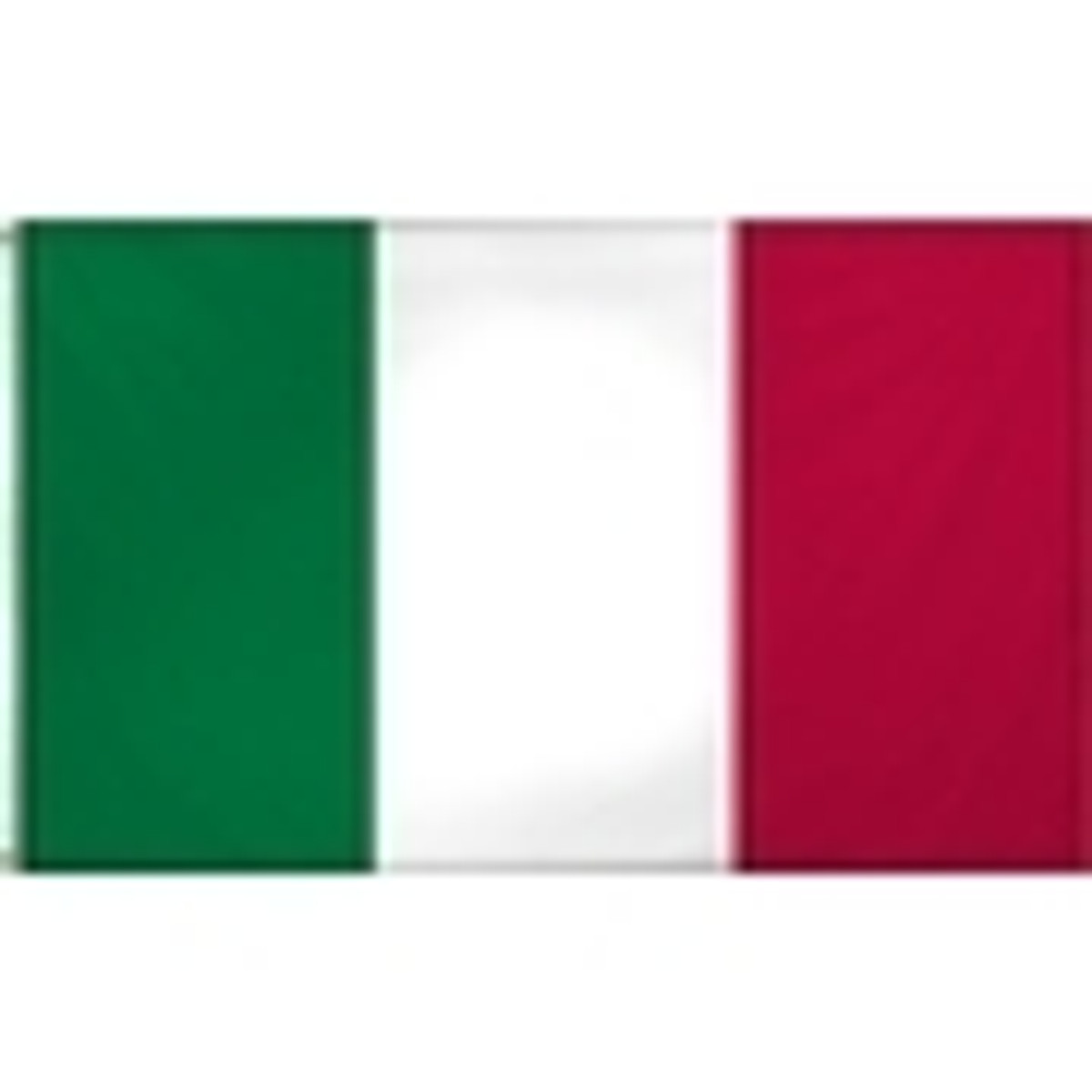 Wave that red, white and... green? Yes! We have the Italian flag available in a variety of sizes made to fit any occasion. Celebrating an Italian holiday? Serving up some exquisite Italian cuisine at your restaurant? These flags will add that extra bit of zest in wherever you decide to put them, whatever the reason may be. Whether you are looking for stick flags to hand out miniature Italian flags at the parade or in the classroom. To the classic and our very popular 3' x 5' nylon flag suited to be your "all weather," outdoor flag, polyester flags with pole sleeves. We even have the flag of Sicily! Also in stock is the Italian Ensign, typically flown at the stern of the Italian Naval ships. Have your friends, family and even customers saying, "È bellissimo," ("It's beautiful" in Italian).

If you want to share your Italian pride on the go, check out our selection of Italian pins, patches and decals. These make a wonderful accessory to any wardrobe.

The Italian Flag sees its tricolor design rooted in history as being influenced by the country of France. During the French revolution, green was originally one of the colors that France was to use with the color red. This was abandoned shortly after in favor of blue, which would lead the country's colors to be the same to that of the Coat of Arms of Paris and also the Kings brother, Count of Artois or Charles X of France. Italian reporters and newspapers would not know about this change for some time after still believing red and green to be the colors of the French. By the time information had reached that the colors were in fact blue and red, Italian public Italian group, the Jacobins would stick with the color green. They would correlate this color to nature, as the rights that were being fought for and protested at the time were basic human rights, rooted in nature. The green, white and red would be in the spotlight for some time being worn by other groups who were fighting and protesting for social equality. This would provide the public with a collective imagery on the matter, as well as further establishing itself as a catalyst for change and a representation of the people of the new Italy.

Italian Flag: What do the Colors Green White and Red mean?

On the Italian national flag, the colors each have their own meaning, both throughout history and today. The most popular meanings we see behind the colors today go as follows: The green represents the country's hills and plains, the white for the snow-covered Alps and other mountains and red represents the blood that was shed in war for the unification of the country. There is another interpretation that places the colors as: green means hope, white for faith and red for Charity.

Did you know most of Italian food is actually inspired by the colors of the Italian flag? Just take a look at a slice of a margherita cheese pizza, with it you can see red sauce, white from the unprocessed mozzarella and green from the fresh julienne basil that is sprinkled on top of it.

Former Prime Minister of Italy, Silvio Berlusconi actually tried to change the colors of the Italian flag. It was brought to the public to make a slight change to each of the colors of the Italian flag. It was proposed that the fern green would be turned to a deep green, ivory would replace the bright white and the scarlet red to ruby. People were not pleased with this proposal and in fact, this backlashed on him pretty badly, upsetting both politicians and the public with this suggestion.

While many Italians love their flag, you will mostly only see it on government buildings, during ceremonies and football games (known as soccer in the United States).

Italy is one of the younger countries in Western Europe. While it has clearly been a part of Europe in its geographic location and been populated, Italy didn't officially become a country until 1861.

Approximately €1,000,000 is thrown into the Trevi Fountain every year. The historical significance and legend behind are if you toss a coin into the Trevi fountain, you will return to Rome.

The city of Rome is over 2k years old. Talk about a lot of candles on their birthday cake.

What's the difference between the Italian flag and the Mexican flag?

Why is the Irish and Italian flag the same?

The Irish and Italian flags while sharing the same tricolor design with the colors of green and white as the first two stripes have different third stripes with orange in place for the flag of Ireland and red for the flag of Italy. The width to height aspect ratios are also different with Italy at 3:2 and Ireland at a 2:1.

Did You Know? The current flag of Italy is only different from the Italy flag of the latter 18th century and 19th century in one way. Do you know what it is? Learn more at FlagPictures.org, where you can also download free high-res pictures and get info and history on the Italy flag .

Give up? The only difference can be found in the white stripe. The arms and crown which appeared on the previous version was removed when Italy became a republic in 1946.

Get More Information on Italy Flags